walking the ozette triangle on a sunny saturday

This weekend I went for a long walk by myself on the Olympic coast in an area I’d visited just once before, a couple years ago when friends introduced me to Cape Alava on a misty November backpack. Although nearby Cape Flattery and Neah Bay on the tip of the Peninsula may be the psychological end-of-the-road, Cape Alava is the actual westernmost geographical point in the contiguous United States. It feels way out there in a beguiling way. It’s a relatively isolated stretch of coast but I can trace the way there in my mind- mile for mile from Seattle, all the way to shabby little Seiku, a village on the Strait of Juan de Fuca with a view of the mountains on Vancouver Island. But a funny thing happens toward the end: From the moment you turn onto Hoko-Ozette Road, the last twenty curvy miles suddenly feel light years from Seattle, the ferries, the Hood Canal Bridge or Port Angeles. There’s something about the way the Spanish moss is draped on the trees that lean over the Hoko River that is very far away.  The same goes for the damp-looking cottage surrounded by skunk cabbage. Or the girl who lives a few miles down the road from Lake Ozette, who was stacking hay in the back of her dad’s pickup truck. And the driveway with the sign at the end of it that reads “Ozette Organics”.  And the far-away looking clearcut ridges that look like they go on forever, which they do in some places on the Olympic Peninsula.

I can still hear the electric crackling of the pebbly backwash and relentless chatter of sea lions from my first night at Cape Alava, when I stumbled out of my tent in the middle of the night to go to the bathroom. If I hadn’t been trying so hard to not accidentally pee on my fellow campers’ tents or stumble into the roaring surf which was startlingly near our campsite, I would have been terrified. Instead I stood there in the dark with a smile on my face. Well, maybe a scared smile.  On the other hand, at low tide on a calm blue sky day the area south of Cape Alava is a sculpture garden of jagged, lumpy sea stacks. It’s an eerie landscape of rockfields and pools and slimy drifts of briny kelp. The surf was strangely muted and comfortably far away to invite exploration, but the deserted rocks have a way of making you feel very conspicuous.

First things first: To even get to the beach, one must walk 3.1 miles through enchanting woods, much of the way on a slippery boardwalk. And I mean slug-slime slippery. I almost fell only once, but it was so nearly disastrous that for the rest of the way to Cape Alava I expended enormous mental effort placing each foot firmly in front of the other with nuclear precision. Where the trail bisects the clearing known as Ahlstrom’s Praire (Ozette Indians burned the trees down to make forage for deer) the boardwalk was frosty. The early morning sky dawned clear blue. I’d been looking forward to taking pictures along the trail to the beach, the boardwalk makes it’s way through fascinating nooks and crannies in the forest. But as I was eager to see Wedding Rocks (hundreds of years old petroglyphs) I decided to keep walking so as to avoid getting pushed overland by high tide in the afternoon. 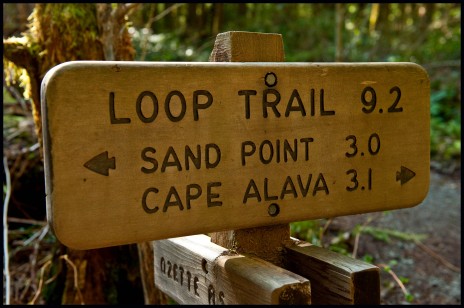 I climbed up the grassy knoll of the little seastack below (more like a sea-pile) for a better view of low tide and was reminded gulls can be messy eaters: Crab entrails littered the rock and grass. After the 3 mile hike from Lake Ozette you’re greeted by the graceful profile of heavily-forested Ozette Island, which sits a tantalizing half-mile from shore. That’s it in the distance, below. Considering their reputation as practically natural-born boaters in their red cedar canoes, I assume Northwest coast native peoples must have spent at least some time on Ozette. Deer have been spotted on the island, believe it or not.

This is how things looked to the north as I set off down the coast, south from Cape Alava. It was lovely reminiscing about my last visit here, but I was excited to see new ground. I took a moment at the edge of the woods to peer below at the brackish little creek where we filtered water last time. In the distance below is Tskawahyah Island (vulgarly referred to as Cannonball Island). Lance, Ken, Kelsie and I spent most of our time in that area.

On the way to Wedding Rocks, I saw seven deer along the edge of the woods. They’re very nonchalant about people here because of the crush of summertime national park backpackers in search of mecca, they didn’t bother looking in my direction. I began my hike south over the intertidal rocks, but after a half mile of zany skating and sliding the novelty wore off and I decided walking in the shade along the narrow strip of sand beach would be a lot more pleasant. I’d occasionally venture further out if I saw something of particular interest.

There are very scenic pools at low tide by the Wedding Rocks, which is about a mile of walking south of Cape Alava. That’s where I took the first black and white picture in my post tonight. It’s one of those full-of-amazing-potential-places shots I feel self-conscious about because I didn’t choose a humongous depth of field.  But I don’t take pictures to make calendars and post cards and my favorite part of the intertidal zone here are the shallow, shimmery pools and rock islands seemingly teeming with a billion spores, translucent larvae and plankton lifeforms. The view here isn’t compressed by foreshortening, in case you’re wondering.  I took that b/w on a 24-70 mm lens with a full frame camera.

I was pleased to finally observe for myself the boulders with the hundreds of years old petroglyphs by the Makah people, I’ve heard a lot about them over the years.  A petroglyph is an engraving or carving in rock. I was a little disappointed I couldn’t document them for myself by camera in an interesting way, the sun was painfully bright on the rocks and the engravings didn’t stand out very well. I think they might be more interesting to view on a cloudy or rainy day, to be honest. 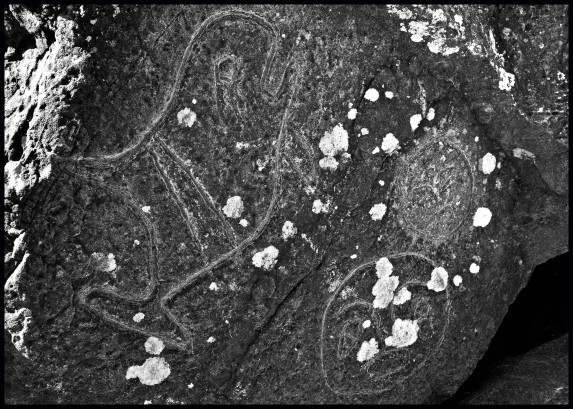 Before I made my way south of Wedding Rocks, I investigated whether or not the tallest rocky spires looming over the beach (not the rocks you see in this picture, they’re up in the woods) had a path to the top. I thought there might be since an informal-looking trail made it’s way ingeniously upward through a thin stand of cedars and salal and skirted the rock walls of the cliffs.  I dead-ended at a steep wall and it occurred to me there must be a history of other beach-walkers looking for the same exact thing. It also occurred to me that at least part of the path I’d walked up was a section of the overland trail.  I turned to look through the trees toward Sand Point and spotted a basketball-sized rock wedged ten feet up in a tree next to the path. Yikes. I decided to get the heck out of dodge. This is one last view of Wedding Rocks, before I turned around and headed further south. You can barely see a black and orange circle sign in the right hand corner: Those dot the coast. They show hikers where to go overland when the tide comes in.

I trudged onward. I found it fascinating how the kelp blended with this flotsam on the driftwood. That’s Ozette Island again, in the background.

This is a great shot for showing how low the tide was!

This picture is for anyone who has ever hyperventilated with rage as they struggled to unknot a 30 foot long extension cord.

Raccoon tracks were everywhere for three miles. Backpackers are required to use bear canisters. If you don’t have one, you’ll get in pretty hot water if a ranger discovers you.  And to add insult to injury, a raccoon or bear will have already eaten all of your food and the only thing you’ll have to munch on is the mint Lifesaver in your shirt pocket. There’s no hiding, you’ll probably run into a ranger before too long if you’re here on a weekend. I saw one at Sand Point checking backpackers’ permits. 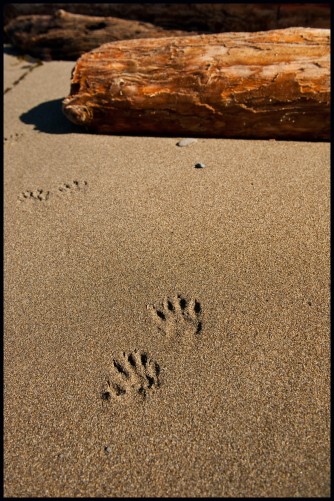 I wonder if this port-hole is visible at high tide? While I was taking this picture, a friendly fellow (grubby-looking after several days on the coast) interrupted me to tell me about how he’d just seen a bunch of eagles eating on the rocks at Cape Alava. He was so excited, he reminded me of my friend Lance.

That’s Ozette Island visible just around the corner from this offshore rock.

After three miles of ambling along the coast (not including the 3 slippery miles through woods in the morning) I reached Sand Point. If you’re hiking the Ozette Triangle (the irresistible loop hiking route that starts at the trailhead by Lake Ozette) counterclockwise, this is where you turn inland and head back to Lake Ozette. I scrambled up the grassy hill at Sand Point for a bird’s eye view of where I’d come from. On the other side of Sand Point, beautiful sandy beaches stretch for miles to the south. Unfortunately, I don’t have any good pictures to document the unusual perspective from Sand Point. A super wide angle lens is almost mandatory to adequately capture the fascinating perspective from this point.

The walk back through the woods to Lake Ozette was pleasant. I think in the future I would like to walk the Ozette Triangle clockwise. The campsites at Sand Point are very nice. The waist-high salal gives you a certain amount of privacy. The dilemma is although the camping may arguably be nicer at Sand Point, the beach is more scenic at Cape Alava if you favor the most rugged, dramatic surroundings.

At Lake Ozette, a school bus-load of junior highers arrived for a weekend backpack. They reminded me of the week I spent on Beaver Island in the middle of Lake Michigan for a high school biology class field trip, more than twenty years ago. A classmate and I assembled a spectacular collection of  insects (we were the class entomologists) that turned out to be the pride of our biology teacher, but we were crushed on one of the last mornings of the trip: We arrived to the camp lab early that morning to find a rodent had eaten our entire exhibit and left only shredded wings and string-like legs. Thinking of this, I sighed sadly and put my hiking boots in the back of the car. I waved goodbye to one of the teachers and headed back up Hoko-Ozette Road.

3 thoughts on “walking the ozette triangle on a sunny saturday”