Adam and I just got home after visiting Michigan (where I was born) the past seven days. I was looking forward to this trip because my sister specially invited us but at the same time I was filled with a sense of dread about traveling by myself with Adam and bearing ultimate responsibility for a little human being while thousands of miles from the resources of home. In there somewhere was anxiety about him having to poop on the airplane or coming down with the flu a day into our journey. You wouldn’t think I’d worry about such things by now but lately we’d settled into a groove at home I was loathe to interrupt.

I’ve spent nearly half my life living far away from the Great Lakes State. The physical and psychological distance between Seattle and the Midwest is great and when I go back I tend to feel like the person on a game-show who won a trip to a place they might otherwise have never visited (it’s the rehash of the the usual you-can’t-go-home). My mom visits Seattle so often there’s a unique state of mind of having been back more recently than I actually have. At any rate, for this trip we spent most of our time at my oldest sister’s house in rural Oceana County, which was not a place I knew at all when I lived in Michigan. It’s interesting to go there and staying with my sister’s family was pleasant. Adam enjoyed the revolving booth of nieces and nephews, immensely. He and I slept together every night in the most comfortable bed in the house and I’d wake up so early in the morning the roosters were only clucking so I could fall back asleep. I relaxed in the shade of humongous willow trees in the backyard while the kids chased the dog in a vain attempt to get their ball back. And the battered metal screen door reminded me of summer when I was growing up.

My sister lives a couple miles outside the little town of Hesperia on a quiet, dead-end dirt road.  The road became a dead-end after the bridge gave out years ago over the normally placid White River, which is designated a Country Scenic Michigan Natural River. This is bear country, someone on the other side of the river has a pet bear. And it’s a big bear, so it’s not a good place to go prowling if you get my drift.  The river was running high and my brother-in-law Dan’s canoe laying in the grass behind the garage was a shining beacon to me. I let someone else tip the orange Coleman over, a Black Widow lives in it sometimes. Over the course of four days, we paddled 12-15 cumulative miles downstream. Twice, my brother and I paddled a nearly seven mile stretch over sometimes-challenging rocky obstacles and sharp bends. We had to portage over a tree twice. We dumped just once, somewhat inauspiciously, after I’d decided it was safe to take my hearing aid out of the air-tight safety of my water bottle. Eric and I paddling together was the equivalent of installing twin jet engines on a little Cessna. When our paddling jived, it was usually because I was only serving as a human skeg. It was a lot of fun, though. A wonderful way to see the countryside……

This is my sister’s son, he’s swinging out over the White River at Pines Point, a pretty area of upland hardwoods and tall pines. Walking here invites imaginations about what Michigan used to look like, before it was logged into oblivion to build the Main Streets of cities elsewhere. I’ve always felt honored when visiting Pines Point. It’s a special place for my sister’s family, not unlike when I take Adam to Mt. Rainier. By the way, in case you’re wondering, I also swung out over the river. I didn’t get as much air because I was worried about a 15 foot limb landing on my head.

There were lots of frogs in a vernal pool at Pines Point. That’s where my nephew caught this little guy. 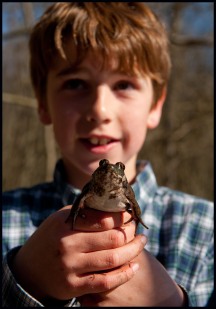 Tonight we walked around Green Lake with Adam. He rode his bike. I chased after him most of the time, I’m a little sore tonight. Diana is getting more and more pregnant and we saw her hardly at all because she lagged behind. We tried to surprise her, we hid at the top of the pavilion next to the shellhouse. Unfortunately, she saw us first.