This morning at a secondhand bookstore I chanced upon a newspaper clipping inside a falling-apart old Kauai guidebook. I wasn’t interested in the book but the yellowed newsprint grabbed my attention: I carefully re-folded it and slid it into my back pocket so I could look at it later.  The scissored-out article comes from the Monday, September 11th, 1995 edition of the Honolulu Advertiser (now the Honolulu Star-Advertiser, the largest daily newspaper in the state of Hawaii). 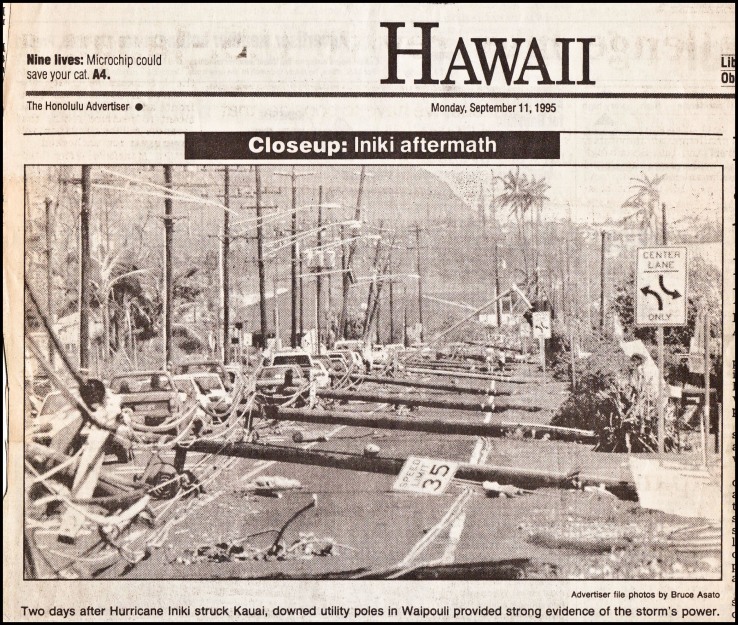 Because of certain climatological factors, hurricanes are relatively rare events in the Hawaiian archipelago. Nevertheless, Hurricane Iniki was a monster of a storm. It’s the most powerful hurricane to hit Hawaii, in recorded history. It approached from the south in September 1992, striking Kauai at peak intensity.  Poipu, where we’ve stayed on the south shore of the island the past couple years, got blasted with 145 mile per hour winds. The hurricane was a Category 4 storm when it made landfall.

Naturally, I acquired an interest in the storm after hiking the Honopu Trail. Before Hurricane Iniki savaged the island, the Honopu Trail had been a popular route renowned for its magnificent Na Pali coast views. It was such a mess afterward, however, that it was largely abandoned for a long time except for diehard explorers and locals slowly working to restore the path. These days, it’s a fairly straightforward trail that’s mildly confusing at the beginning (even I screwed up and backtracked out of fear I was headed the wrong way, albeit it turned out I was on the right track). Unfortunately, I chose to hike the Honopu Trail on a day when it felt like a carwash. I couldn’t have gotten wetter if I’d walked naked through a carwash. I even stood around in the rain for a whole hour, waiting for the apparently magnificent views of Honopu Valley to reveal themselves. This hike made me a bitter man for the rest of the morning: When I got back to Poipu, Diana and Adam told me it had been sunny there all morning. Bah humbug! 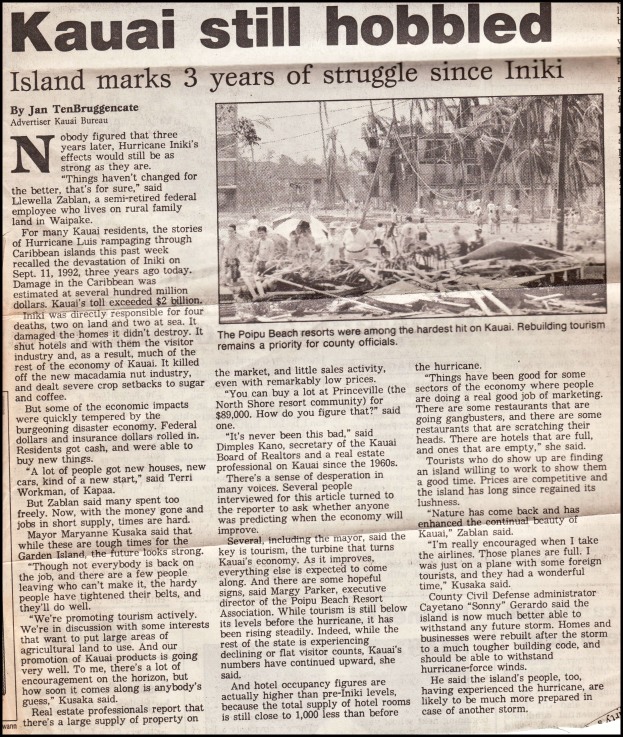 Tonight I went kayaking west through the Ship Canal to Lake Union for a sunset paddle that didn’t come to fruition (from a photography standpoint) because of thick clouds laying low on the western horizon. I put in at the Arboretum: In hindsight, I should’ve done a little shooting while I was still there because the reflections were razor sharp and the colors were gorgeous (did you know there are 11,238 different shades of green and yellow?). I couldn’t believe the clarity. But of course, I thought it would be like that up the Ship Canal so I could hardly be bothered to stop after only a few minutes in the water.

I only went a little way past the Ship Canal Bridge before I turned around. And once again I had problems with my feet and lower legs falling asleep, dammit! I was apprehensive as I made my way through Portage Bay, a little voice on my shoulder wondered if I wasn’t getting myself into trouble. I’m so adamant about working through this pesky little problem, I refused to throw the towel in. I’m a little depressed about how often I had to pull my legs up to get the blood flowing again, but at the same time I believe there’s a moral victory to be had. I could have easily gotten spooked at the first sign of tinglyness and turned around for home.

On my way back to the Arboretum, Portage Bay offered spectacular views of towering cumulonimbus clouds that glowed pink over the Cascade Mountains. It was an incredible sight! Not incredible was me practically dropping my boat in the process of lifting it up onto the car. I thought I had it up there pretty good and all of the sudden it was falling sideways and my bow landed with a gentle thud in the mushy gravel. Fortunately it was dark in the Arboretum and no one saw it, they would have been in stitches.