if you drool on me, i shall become more powerful than you can possibly imagine!

If you drool on me, i’ll become stronger than you can imagine. Adam said that to Oliver and I the morning after he watched Star Wars for the first time, hahaha! Oliver and I periodically like to chase him around the house and try to get him, for sport. Adam eggs us on but when we actually get drool on him he panics as though he’s been splashed with hydrodangerous acid. Some people have major hang-ups about baby drool. It doesn’t bother me at all, I operate on the premise that babies’ mouths are much cleaner than ours. Don’t get the wrong idea, Adam isn’t leery of Oliver Fern- he lets Oliver pull and twist his hair into dreads, haha!

This is an old VHS tape cover’s rendition of a classic movie poster for the 1977 Star Wars. I know VCRs are dead but it was mandatory that Adam watch the original Star Wars his first time- not George Lucas’ remastered version (whatever you want to call it) with new special effects and scene changes (Greedo shooting first in the Mos Eisley cantina instead of Han, a downright awful-looking Jabba the Hutt waiting for Han by the Millennium Falcon).  Even though we don’t have a television, fortunately we still have our old VCR from years and years ago. My initial experimentation revealed the VCR and our big desktop computer monitor (a 25 inch flatscreen) to be compatible. True, the picture quality of the old VHS tape left much to be desired but part of me was charmed by the rusticity. The next step was to move the computer monitor out to the livingroom and sync it with the stereo. The sound quality made up for the picture!

We started the movie when everyone else went to bed, we had the living-room to ourselves and bedded down on the floor with bean bags and blankets. The opening scene with the Tantive IV and Imperial Star Destroyer was like thunder and lightning for Adam. The Jawas were epic! We had several intermissions for ice cream and each time we made our way out to the kitchen Adam would dreamily exclaim “Papa, this is really fun watching Star Wars together!” He was positively riveted from beginning to end. 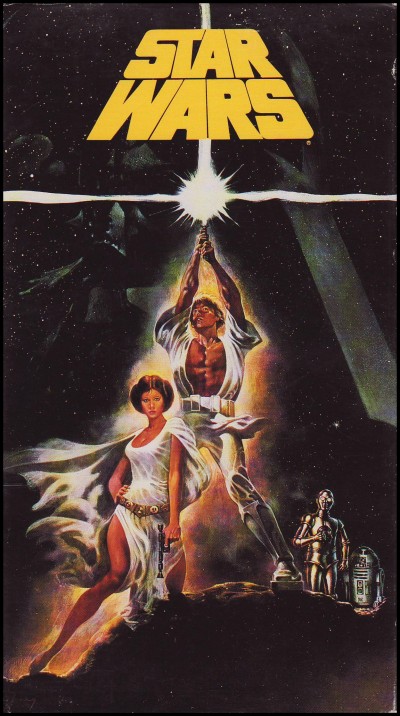 This morning Grandma and I took Adam and Oliver Fern downtown to see Santa Claus at Nordstrom. Diana walked over from work to rendezvous with us. I wished it was the real Santa Claus because Adam charmed him out of his big black boots. Oliver sat on one knee, Adam on the other. Tonight, Adam and Grandma made a big batch of gingerbread cookies, I keep stepping on colored sprinkles everywhere I go in the house. Lucy gobbled them up for awhile but stopped after a particularly bad coughing fit, I think they were getting stuck in the back of her throat.