Saturday, I hiked the Griff Creek Trail, on the Olympic Peninsula. I wanted to get an early start so I could see Oliver Fern and Adam before they went to bed for the night, so I left the house a little before five o’clock AM. I was frustrated about getting such a late (seriously) start but fortunately sunrise is still pretty late this time of year. I drove down to Tacoma and then crossed the Narrows Bridge to drive up the Kitsap Peninsula, since the first ferry to Bainbridge doesn’t depart until 6:00 on the weekend (to reach the Olympic Peninsula from Seattle, you either take a ferry across the water or drive down 40 miles or so and then back up, crossing the Sound at a narrow point via bridge). I generally despise doing the down-and-around drive during the day (it feels like the worst kind of backtracking) but it doesn’t bother me in the least morning-time if it means getting a super-duper early start. 4:45 AM? Believe it or not, that’s a borderline late departure for driving down-and-around. Once in awhile I’ll struggle with the alpine start (insomnia the night before a hike because I’m so excited is a major problem for me) but I feel exhilarated once I’m on the road in the dark. Normally I’ll listen to music but sometimes I give Mom and Dad a call (they live three time zones away) and chat with them for awhile before I get out of cell phone range. Occasionally I’ll simply think deep thoughts to myself, although that can be hazardous depending on my tiredness level. On this morning’s drive  I spent a lot of time listening to ESPN talk radio. Normally I can’t stand the national sports radio programs because the announcers are so generally obnoxious and interruptive of each other, but I was interested in their analysis of the weekend’s upcoming college basketball games (like Michigan versus Indiana). Then the local ESPN affiliate took over and I was subjected to the fishing report, which wasn’t unbearable as I would’ve imagined (it’s quite fascinating receiving the various insights as to how the local and regional weather have impacted fishing prospects for certain points in time) except when they lost me cooing about the myriad variety of fishing lures.

As I arrived in one of my favorite little towns, Port Angeles, I fretted about the surprisingly heavy overcast skies but took relief in the solace it could result in scenic photographic opportunities since I’d be climbing a few thousand feet. Maybe I’ll get above the cloud deck, I thought to myself.  But a few miles on the other side of town things started to clear up a bit. I shivered with a smile on my face when I got out of the car and stepped into the early morning cold at the Elwha Ranger Station (the trailhead for the Griff Creek trail is behind the ranger station). My hiking boots were still crusty from all the mud on the Shi Shi Beach trail.

The Griff Creek Trail offers beautiful forest hiking, I switchbacked and looped my way through dense grottos of ferns, oregon grape and salal. Everywhere you look is covered in moss, it seems. I was in no hurry but made good time in the cold- I love hiking in chilly weather! At 1.8 miles (and 1,500 feet of elevation gain) I reached the breathtakingly named “Rock View Point“, apparently a turnaround point for a lot of hikers. I tried to take some pictures, but didn’t have much success. The viewpoint and valley below were still in the shadows while the mountains in the distance were bathed in bright sunlight. I contemplated hauling out my tripod and putting some grad filters through the paces but I was so excited about continuing up higher that I crossed my fingers and simply turned my ISO up and underexposed a few takes in the hopes I could salvage something decent later to at least share.

The Griff Creek Trail is noticeably rougher above the aforementioned Rock View Point, but not bad. The tread is rockier. There were a lot of downed trees over the trail. I was a little nervous about the numerous trees fallen over the trail like matchsticks, but most of the carnage occurred during a storm early this winter. Still, I kept my eyes and ears open. My only real pause came at a doozy of a rock slide that blocked the trail. A small wooded rock bluff in a steep area of the woods had released and obliterated the path. The hike nearly ended here because I was so spooked by the freshness of the slide and the lack of safe detours around the slide (the forested mountainside below was ridiculously steep, with moss and fern covered rocks that had no doubt fallen years before). After backtracking a tenth of a mile to survey one last time for a potential detour to the other side of the slide, I went back up and steeled my reserve for a careful crossing through the mess. It wasn’t as bad as I anticipated, but I still count it as a major victory for courage on the part of the cowardly lion.

Finally, I arrived at the End of Trail sign, elevation 3,300 feet. The mountainside here is a little spooky for the mousy hiker who walks alone, but it really is not that bad. I spied a faint track in the loose dirt and decided to follow it as long there was no exposure to a fall. The open, ledgy mountainside here is steep as heck, but it’s safe enough for a sturdy walker. The woods smelled so good here- balsamy fir and juniper! Shrubby manzanitas scattered here and there. And madrones, one of my favorite trees. 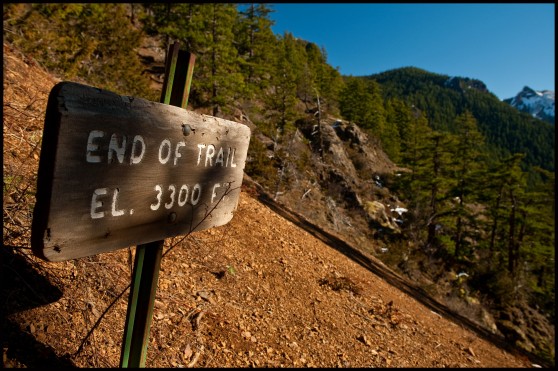 Here’s a view of the Unicorn from the end of the trail. The other side of Hurricane Hill is just to the right and out of view.

A westerly view of Cat Peak, looking through the branches of a madrone: 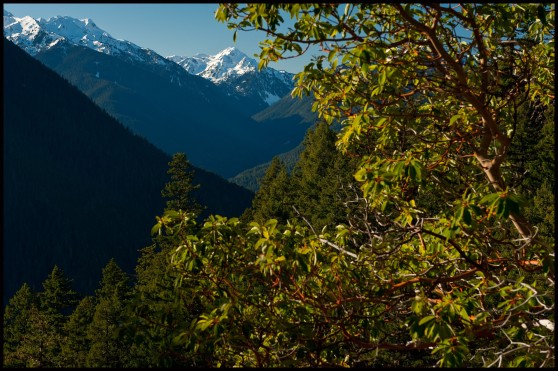 This is the place where I ate my lunch, later. This is right after I’d scrambled up really steep dirt. Talk about a confirmation I made the right decision to continue! The views from the End of Trail sign are nice, but very filtered by the woods. Beyond, the vistas unfold with every step! That’s Cat Peak straight ahead in the distance, and dried up Lake Mills below.

I continued on in the hopes I’d find a path to a more open vista, hopefully atop the rocky cliffs and knobs that towered above me. Sure enough, the faint track gradually turned into a definite social trail and soon I found myself on the shoulder of the rocky cliffs that tower above the End of Trail sign. By this time I was feeling exhilarated about turning my little hike into a bonafide adventure (this is me we’re talking about, my notions of adventure may differ from yours) but I was also a little spooked by the ridge. On the south was a sunny drop-off to certain death. On the north was a icy-hard, snowy drop-off that would ensure a fast slide into the woods below. The scrambling on the ridge was dry and I clambered upward a hundred feet. I’ve done much more exposed hiking, but at the time I felt extremely vulnerable. I took the time to take a few pictures, including the one below looking down to Lake Mills. My only major regret about the hike is that I didn’t stay up on the ridge and eat my lunch. Or at least get my super wide angle lens out and take a good picture of the ridge for perspective. But I was petrified a mountain goat was going to show up, and there was no way I was letting myself get cornered on such an exposed piece of ground. So very rubber-legged, I butt-scooted down to find a more comfortable place to relax for the morning. And let me tell you, I did butt scoot down. I can’t wait to go back to see if I’m exaggerating the difficulty of the ridge. The fact there was hard snow on the ridge next to my route didn’t help matters. 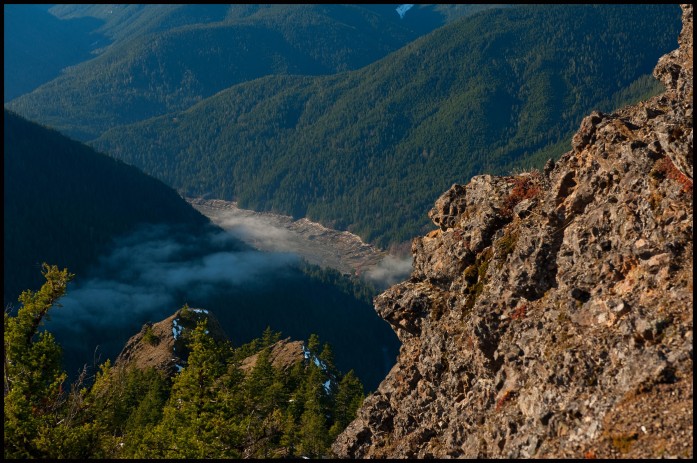 I met only three other parties the rest of the morning. There was the nice couple I ran into just as I was descending below the ridge- experienced and knowledgeable about the area, they told me they’d never seen any goats here.  A couple hundred feet down lower, at my lunch rest, I talked with a really nice fellow (and a Brett Favre lookalike) who told me it’s possible to make a loop trip out of the Griff Creek Trail by linking it with the nearby Cascade Rock hike. And then finally, at the Rock View Point I made the acquaintance of a hiker (Joe) who was taking videos with his Go Pro camera.

My timing for the boat ride home- Impeccable!  I arrived just in time for the 4:30 sailing out of Winslow. I was so tired, I reclined the driver’s seat back and  rested in the car. Laying there, I was reminded I owe Adam three arcade games on the boat the next time we sail. Coming home from Shi Shi, I promised him he could play the Pac Man game on the passenger deck but it was too late when we boarded that night and so we stayed in the car and horseplayed. 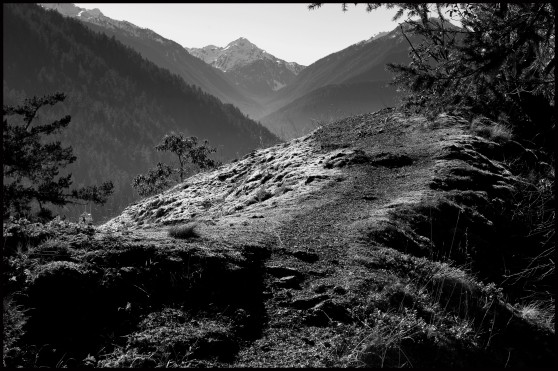 6 thoughts on “the Griff Creek trail”