On Saturday morning, Adam and I attended the open house for the Seattle Fire Department’s fire station 6, it was held 11 AM to 1 PM. The old station, an elegant 1931 art deco structure on 23rd and Yesler that I’ve admired for a long time, was apparently too small to serve as a modern station.The new station is on Martin Luther King Jr. Way and Jackson Street. I pass that way all the time so I’ve kept a close eye on the construction process.  The open house was quite a zoo but Adam had a fabulous time, so did I. We were able to tour the entire station- right down to the kitchen, common areas and bunkrooms. Adam got to sit in two fire engines, including a big ladder truck. Lots of firefighters milled about, eager to answer any questions we might have- I came away impressed with every single station member I spoke with, they were great ambassadors for the Department.

These were some gauges and controls on the pumper engine. The only drawback to the tour was that it started drizzling fairly hard while we were out in the station yard admiring the engines. That was a kind of a bummer for me because I’d been looking forward to scouting better pictures than I took, but the rain certainly didn’t dampen Adam’s enjoyment! 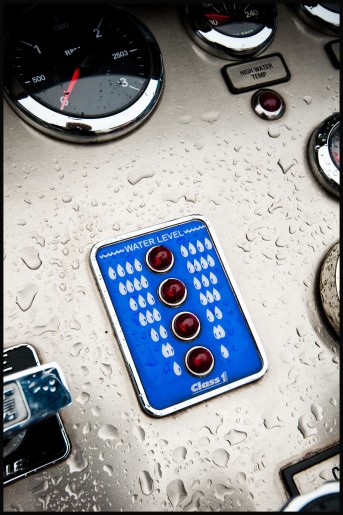 It was interesting to observe how much cutting equipment is carried on the trucks. Chainsaws, buzzsaws, circular saws, humongous monster saws that look like they could cut through a bank vault or ship anchor……. 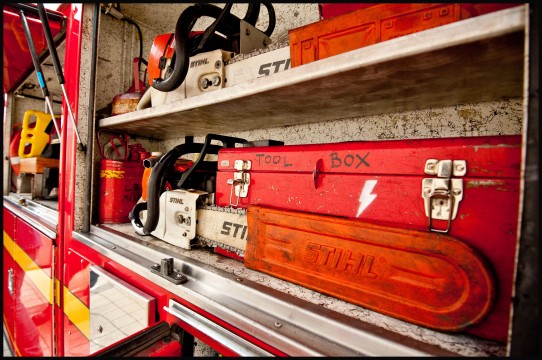 Adam sitting on the back of an engine!

Gear folded up in the side of the big ladder truck:

After lunch at the house, Adam and I rode the bus around for a little adventure. En route, we decided to head down to Pioneer Square and see the firefighter monument in Occidental Park. We rode the #48 down 23rd and hopped off at Jackson Street, where Adam’s fire helmet nearly blew away after the string holding it on his head tore off. Luckily I was able to retrieve it. Thereafter we hopped on the #14 and got off in the International District so I could show Adam the Pinball Museum. He wanted to go in really bad but I convinced him it was an exciting field trip for another day (because once he gets a taste of the machines inside there’ll be no way out). From the ID we walked over to Occidental Park, where we discovered a raucous gathering in honor of the Sounders’ match with the Portland Timbers. We stuck around until everyone started the wild march to the stadium. Adam got caught up in the excitement and had his face painted with lightning bolts featuring Sounders colors. Then we walked back up 2nd Avenue to Diana’s office so we could ride home with her. Oliver Fern was very excited to see us when we arrived back at the house, he and Grandma took a long buggie-ride in the afternoon.