The first picture below is of the lovely view from the side of Hibox Mountain, looking roughly southeast down to Box Canyon. The Forest Service once planned to clearcut the forest below. Now, part of what you see is included in Alpine Lakes Wilderness. Box Canyon is probably most well known for the trail to popular 27 acre Rachel Lake. I haven’t visited there in almost ten years.

This view was the middle of a two mile stretch during which I climbed 3,000 feet straight up. It felt like straight up. I kept my load light for this hike, leaving the D700 at home in favor of the little D5100. I had very high hopes of standing on top of Hibox, but alas, I was foiled by the exposure of the final 150 feet of summit rocks. Some people would argue there IS no exposure, the rock scramble to the top is widely-touted as merely class 2 climbing. I’ve done plenty of class 2 scrambles over the years and even a touch of class 3, so I imagined Hibox being well within my parameters. But no, think again: I took one look at the apparently simplest route and my fear radar stopped me dead in my tracks. Surprising, inexplicable and spirit-crushing. Okay, maybe not really that inexplicable. And so I took an hour to think things over. I sauntered up to the start of the scramble. My brain and body wouldn’t budge, their decision was final. This is what happens when life-loving wimps climb mountains. 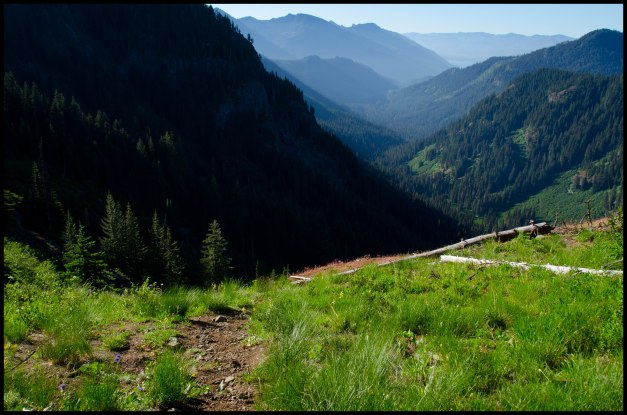 When I’d taken the picture above, I had just finished a nasty section of the path up Hibox that requires pulling oneself upwards over practically-vertical dirt and rocks by using trees and plants as belays (vegetable belays). Needless to say, the trip down was about as rotten as it gets. I resorted frequently to controlled butt sliding where I could keep myself wedged between rocks, muttering the occasional fuck here and fuck there and laughing wickedly. If anyone had come along and seen me, I would have been the laughingstock of Box Canyon. There would be videos of me on Youtube. After a while, there was no laughing. It gets really hot on this side of the Cascades.

To make matters worse, the entire way down I was tormented by scads of floating inchworms. Inchworms give me the willies. If you magnify them a thousand times, you’ll see exactly why!

My consolation prize was Cardboardbox Mountain, a little outcropping a few hundred feet down the summit ridge from Hibox. While it does not offer the supreme reward of 6,547 feet…..it did provide shade. And essentially the same views as on top. The scenery north of Hibox and Cardboardbox is truly glorious, especially of the Park Lakes. That’s Upper Park Lake above, an 11 acre lake that can be reached via the Mineral Creek trail. Below, that’s Kachess Lake in the distance (motorboat central). I’m standing at the beginning of the summit scramble- meanwhile, Cardboardbox is the blackish nub on the ridge below. I honestly don’t know if the book is closed on Hibox Mountain, for me. But it will be awhile before I return. 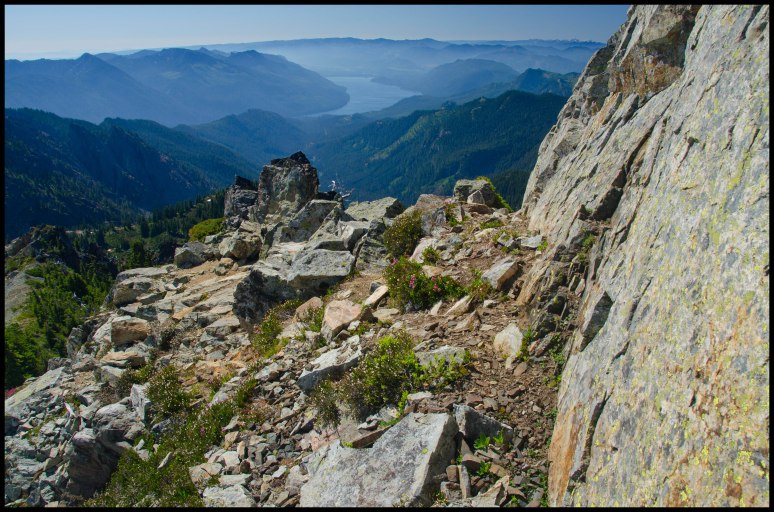