the untalked-about realities of barnyard basketball

This is the doorway to my grandpa’s workshop, at least what’s left of it. I wanted to get in there pretty badly last summer to look around at artifacts but an army of hornets and wasps was guarding the place and the nearest reputable hospital in case I was stung nearly to death was at least two counties away. That’s not to mention, this outbuilding is ready to pancake just about any day (but it has been more than a hundred years so it could be another decade). I spent thousands of hours of childhood happiness in this barnyard, which is up the hill from my childhood home. Among other diversions, there was a basketball hoop on the side of the barn that stood between here and the silo and it had no net and consequently I did a lot of frantic chasing of the ball before it skittered into piles of cowshit. There’s out-of-bounds and then there’s out-of-bounds. Fortunately, our basketballs were badly deflated half the time because they got run over by tractors or left out in the hot sun and brutal winters or because they came from the Ravenna flea market (or a combination of these factors) so they tended to lose momentum fast. 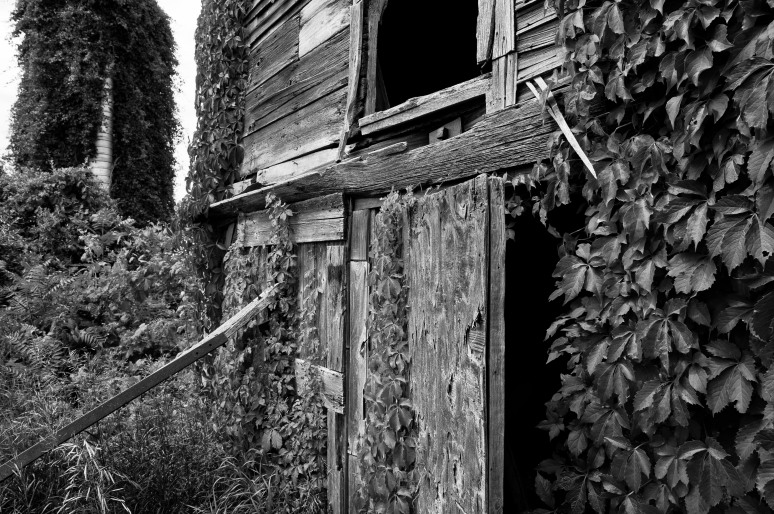 It’s still quite hot in Seattle. So hot, I decided to use the oven last night to make it a little hotter. Big mistake. I found a partially- melted crayon on the kitchen counter. We continue having to allow Adam to stay up super-late because going to bed at the regular time is pointless when it’s so warm. He’s getting deep into The Mysterious Benedict Society, I found that series for him last winter and he finally got hooked on it and earlier this evening I heard him giggling out in the living room (probably something funny that Constance Contraire did). For fun, Adam and I have started referring to Oliver Fern as Constance Contraire when he’s in a grumpy mood.

This evening’s post is partially inspired by my run of black-and-white images the past couple months. I’ve had this image sitting in a special folder for quite a while, I had a certain childhood story I’d planned to share with it but now I feel like just putting the picture up and letting my loyal readers envision a super-nerdy kid wearing coke bottle glasses, chasing basketballs before they land in hay-strewn cow dung. I think that’s Virginia Creeper climbing up the side of the shed. I really liked the combination of the textures of the vines with the old clapboard. I know this isn’t a stunner but it made for a personally meaningful image.

One thought on “the untalked-about realities of barnyard basketball”